Changes in Light during Meditation

The footage, when run through the Biofield Reader software, revealed unexpected and remarkable changes in the light on, and around, Diana. The position of camera, subject and the lighting remained the same throughout the session.

The images above were captured during the first part of the meditation session. Even more remarkable changes occurred as meditation continued.
Click here to see what happened
See your light increase with meditation
Some people, for example, gurus and clairvoyants, say that they can see the light around individuals and assess their spiritual development. They also say they see where there are energy blockages, maybe from a past physical or emotional wound. We can see these anomalies with biofield imaging.

Craig Hendricks uses Biofield Reader, which processes real-time video, and is able to show changes in the field around us as they happen. Craig has been following a regime of early morning meditation practice with chakra balancing and charging with Binaural Beat background music. He has been filming during these sessions and running the footage through Biofield Reader. Below you can see some 'snap shots' he has taken from the footage which show the fantastic changes in light during a period from December 2019 to June 2021. 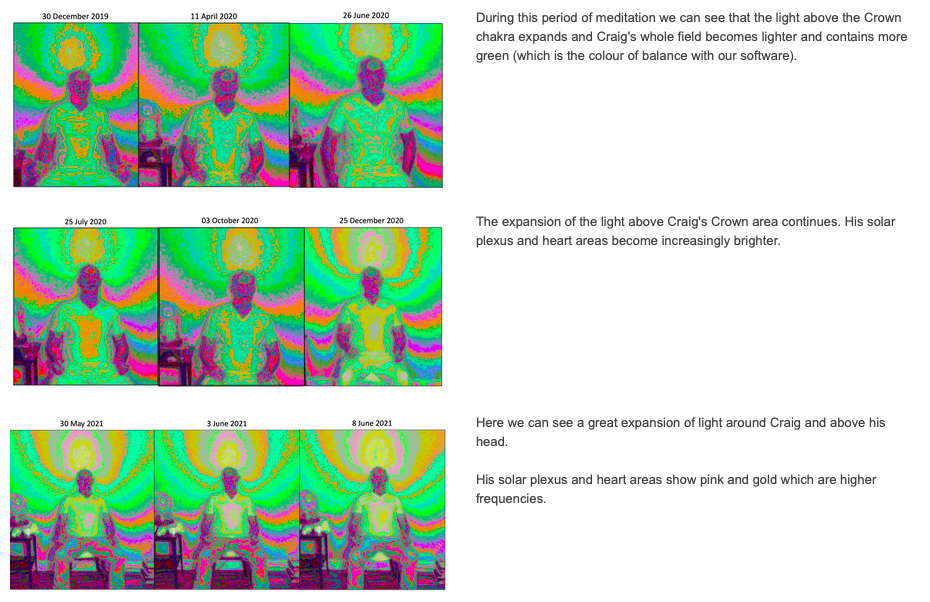 The PDF file below includes Craig's methods of meditation, and camera settings. His contact details are included.

Download File
Energy expansion - both instantaneous and over a period of time
Expansion seen during meditation and while sending distant healing. Research by Craig Hendricks - Analyst and Biofield Researcher in the USA
Craig Hendricks has been recording and charting his biofield over a period of time to see if there are any noticeable changes. He was very surprised to see that not only did the light around him expand during various meditation techniques and while sending distant healing, but that his aura/biofield actually improved from his baseline at the start of his research. In fact, he has found that the belief that a meditator's energy/light improves along with regular meditation is true. He has seen it for himself with the help of Biofield Reader which processes the signals from a still or video camera to reveal patterns and changes of light which the eye cannot normally see.

Analysis of biofield scans above, from baseline on 25 July to scan on 25 December:
25 July 2020 shows red on face and arms. Red here indicates where the biofield/energy/light is congested and not flowing well. Red streamers emanating from head at level of base of skull indicate imbalance.
03 October 2020 shows less red streamers, which are starting to move down away from sides of head (perhaps to ground the congested energy?) Area above crown is a higher frequency - as seen by brightening and expansion of field. Higher frequencies/lighter colours seen over torso.
25 December 2020 shows an even greater expansion of light over the crown. The brow area is now balanced (indicated by green). The red streamers are moving down even more which we often see as the energy balances.  Less red congestion over the arms. The whole of the torso area has lightened to a higher frequency of light. These scans demonstrate an expansion of light around the man and a balancing and brightening of his field generally. For more information about the colours and patterns seen with Biofield Reader see our User Manual free to download from our Home and Training pages.
Shiva Sadhana Meditation
Energy expansion using REBAL 'Resonant Energy Balloon' technique
REBAL - 'Resonant Energy Balloon' technique builds and expands the energy around us. Below we can see Craig Hendricks carrying out the REBAL technique. First, he imagines a ball of energy building around him. A ball of light of the highest frequency. He then releases this energy with the intention of blessing his house. You can see the whole session processed with Biofield Reader in live-stream video on YouTube
Analysis of REBAL Session 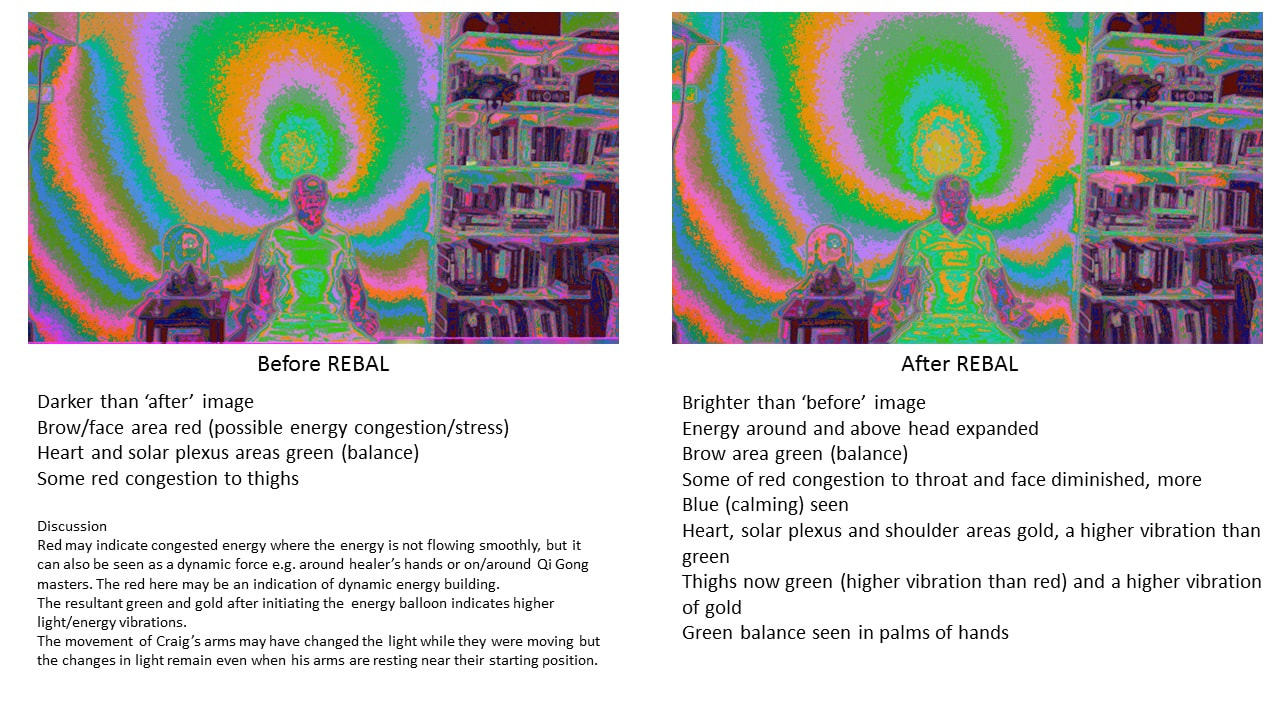 Biofield Reader The Biofield and Meditation. See changes in the biofield with meditation studies from Jane Solomon