Interpretation of the light on and around the body
Interpretation of the light on and around the body using modern technology seems to be showing interesting and useful data. Biofield Reader and Biofield Imager utilise a specially-designed colour filter, which re-colours the pixels of an image (video footage or still images), to enable our eyes to discern more gradations of light than is normally possible with the naked eye. After taking numerous scans and learning to recognise patterns, an experienced user can often gain relevant  information about a person’s general ‘energy’ or ‘qi’/'chi'. Analysis of patterns, as well as colours, appears to offer useful information about the state of health or imbalance of the individual. After conducting numerous scans we have found the following correlations. Red and mauve, seen in pools or wide streams, are often seen over 'problem' areas or along channels relating to the problem area. These colours could indicate where qi is not flowing smoothly or where there is stagnation. Colours seen in more healthy/balanced areas are green, yellow and orange.  As areas heal, the red diminishes and more green or blue are seen. This is a very basic analysis as the person's biofield is looked at as a whole. Pattern recognition is also a very important part of the analysis of scans.
A more balanced field seen after acupuncture
The man in the scans below has benign enlargement of the prostate. With the onset of more stress in his life he found that he needed to pass urine more frequently, with an increased feeling of urgency. He had to get up in the middle of the night to pass urine. He wondered if acupuncture could help his urinary symptoms. He also reported that he had become very short-tempered and that he was comfort-eating and having far too much sugar. The scans below show his energy/light field before and after 4 acupuncture treatments. I used electroacupuncture, which means that I applied small currents of electricity to the acupuncture needles I inserted in his lower back - to help his body heal. His diagnosis was Liver Qi (energy) stagnation, Spleen and Stomach Qi deficiency with accumulation of Damp/Phlegm in lower abdomen.
Pain left shoulder and upper back tension - before and after Acupuncture
The scans below were taken when the man had pain in his left shoulder, and upper back tension. I pointed out where he had imbalances - seen as red congested areas. He found the scan easy to understand and could see where his light/energy was congested. 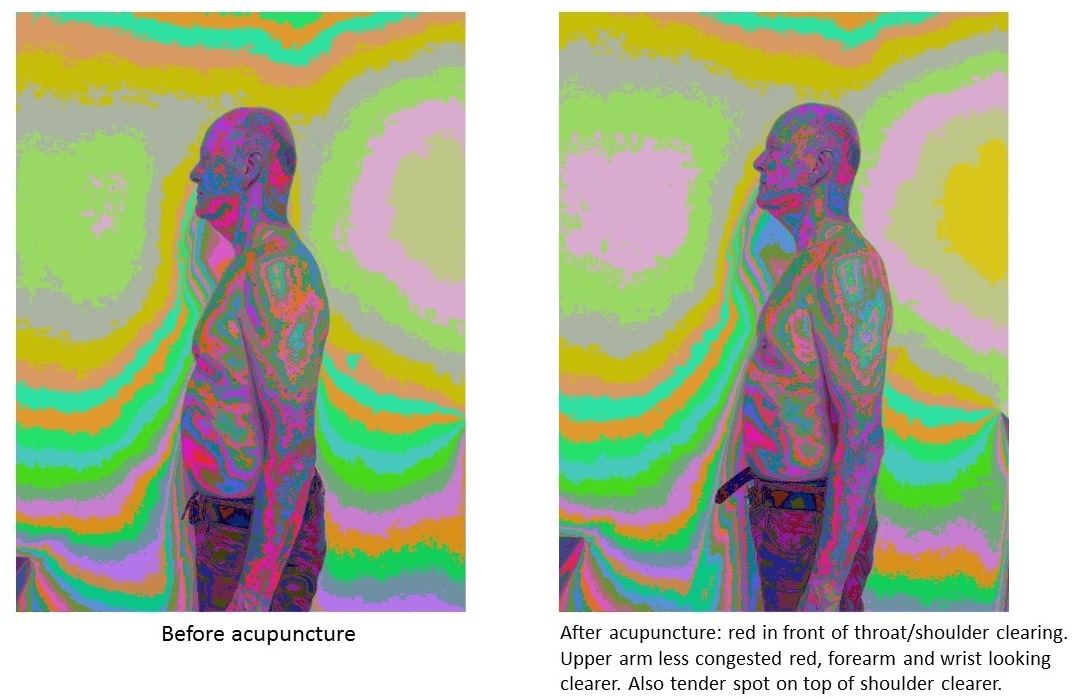 Once I had given him a brief explanation of what the colours indicate he could see for himself where the light/energy had improved after acupuncture. He was impressed with the way his body had responded - especially the green (colour of balance) he could see on his left temple. After treatment with acupuncture he reported that his shoulders felt less tense and that his shoulder pain had reduced.
I was interested in the fact that GB20, GB21 and SJ5 all showed up as red congested spots before needling and showed less red/more green (on GB21) after treatment.
Stagnation of energy in channels and over acupuncture points in carpal tunnel syndrome
A heavily pregnant woman came to see me in my clinic complaining of numbness, tingling and swelling in both hands. The left hand was worse than the right. Her doctor had diagnosed Carpal Tunnel Syndrome. I took some photos of her lower arms and hands with my mobile phone. I had good lighting on ceiling so didn't need to use flash. I downloaded photos to my computer and ran them through BioField Reader. They were interesting.
The left arm/hand show more congestion than the right arm. Congestion is seen as red and more chronic congestion (i.e. congestion which has been there longer) often shows as mauve. These colours can be seen 'on' or 'around' the area.