The Environment - the Earth and the Skies
Digital light filters such as BioField Reader can be used for assessing the light field of the environment to see where the land is ‘healthy’, i.e. has more balanced colours and patterns or has positive energy. The system can also be used to see if plants are flourishing and vibrant or if they are having problems growing healthily in their surroundings.

In the picture below you can see a flow of red on the ground which corresponds closely to where water is being diverted from a dam (which is situated to the left of the picture) in underground pipes. The pipes lead to the water tap is behind the tree directly behind the pipe marker. 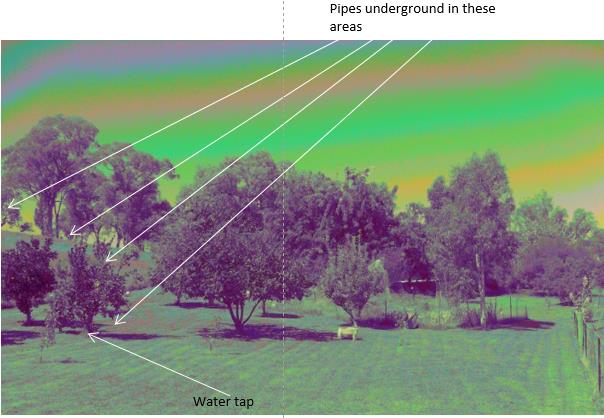 Water flowing under ground - red seen above ground where pipes are situated
Negative Energy in the home?
Biofield imaging is able to look at the light fields of your immediate environment and can help monitor any devices which you may be using to harmonize your home. It has long been known that 'dirty electricity' exists. This is a term used to describe a form of  EMF pollution found on house wiring which studies show can cause adverse biological effects.
Positive Energy seen in environment
Rooms with positive energy, where happy times have been spent are seen to have flowing light and bright vibrant colours with biofield imaging. Visitors to these rooms will feel relaxed as the energy fields are beneficial for balance and health.

Below is a room filled with high frequencies of light. Notice the near absence of red.

By using biofield imaging you are able to assess the light and harmony of your house and the houses of others which will help to create a healthy environment in which to live. 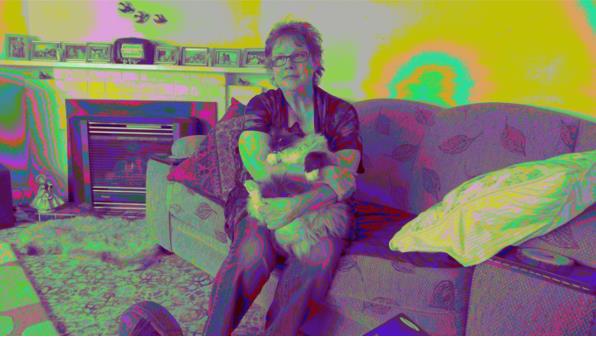 Positive light fields
Negative energy seen in environment
The metaphysical science of Feng Shui is simply the art of flowing light and energy.  In a ‘positive’ room you will see coherent, well-defined lines of light.
In a room in which the light is dark with shadows, the light does not flow. This suggests a potentially draining environment. If your own biofield is strong, a brief visit will only have a mild effect. If your biofield is dull and weak the negative light field in the room will effect the biofield and lower the frequencies of vibration, you may well feel sick.