Your eye has a very limited capacity to perceive all the signals around you. You need a microscope to see very small things, a telescope to see things far away, and an infra-red camera to see in the dark. Similarly, Biofield Imaging (digital light filtering) software provides another way of allowing you to see more information about your surroundings. It takes the light signals received via video and still cameras and digitally filters them with a computer programme; with the aim of altering the image to reveal 'hidden' things the eye would not normally see. The original purpose of digitally filtering the light around subjects was to aid human health assessment. However, whilst investigating this health application of the software in our research we discovered that various practitioners were receiving 'paranormal' results - i.e. the images the light filtering produced were not in the 'normal' or 'expected' category. See examples below.
Are we seeing an Inter-dimensional life-form?
Biofield Reader (BFR) can ‘reveal’ what the eye normally can’t see. In an experiment, the researcher wanted to see if anything would show up on BFR when she asked for benevolent inter-dimensional beings to reveal themselves.

She saw the light change instantaneously (seen with the BFR software on the computer screen) as soon as she asked.

Psychic interpretation of the biofield - see like a clairvoyant

Many years ago I (Jane Solomon), along with my husband Grant, worked with Psychic Surgeon Stephen Turoff in his clinic in Essex, UK. Over the year we were there, we took hundreds of  biofield images of people before they had Psychic surgery.
We were very interested to get Stephen's interpretation of the scans we took with our biofield imaging system. Stephen says he receives information psychically about a person’s physical, emotional and spiritual wellbeing. Stephen shared his own unique viewpoint on the scan of the woman below.

Stephen is fascinated by the biofield scans. He says, 'They're like looking at a cartoon version of what I see with my eyes'. Stephen states that he receives information at many different levels about an individual. He not only sees their energy (biofield) but can also sense traumas in their past. These traumas can remain in the field, sometimes even for a lifetime.

In addition to her painful lower back and the hip, the woman above had discomfort in her upper back and throat. This upper body congestion has resulted in the thick, dark, red and blue imbalances seen within the shadows under her arms. The yellow energy in solar plexus and navel areas suggests some stress. She has congested red and blue energy in pelvic region which suggests she may have problems in that area.

Unfortunately, since she did not revisit the clinic when we were there, we weren't able to do an after psychic surgery scan to see if there were any visible changes after treatment and also to ask her how she felt.

Most interesting is that with the help of modern technology such as BioField Reader, non-clairvoyant people have the potential to see 'clairvoyantly'.

Changes in Light during Meditation

The footage, when run through the Biofield Reader software, revealed unexpected and remarkable changes in the light on, and around, Diana. The position of camera, subject and the lighting remained the same throughout the session.

The images above were captured during the first part of the meditation session. Even more remarkable changes occurred as meditation continued.
Click here to see what happened

Below are images taken by Dr Yamuna, a qualified medical doctor specializing in anaesthesia. Some time ago, after beginning to see the energy field or aura with her own eyes, she became very interested in energy medicine of all kinds. Dr Yamuna showed us one of the paranormal results she received using the filter, and kindly gave us permission to publish and share the relevant images below, which also show her original handwritten notes.

Dr Yamuna was conducting an experiment in her clinic, to see how Kundalini meditative states affect the light patterns around the person meditating. Image 1: subject starts her meditation. Image 2: subject goes deeper and maintains the Kundalini meditative state for a few minutes. Image 3: subject stands up after meditation - her body shape begins to change in the filtered image and the outline of an oval shape begins to form. Image 4: An 'egg‘ enclosing oval bands of colour completely replaces the subject's form. Image 5: another woman in the room enters the camera‘s field of vision and appears to 'disturb' the subject's light field and so ‘breaks’ the 'egg' pattern. There could be many interpretations of this series of events and the resultant images captured by the digital light filtering equipment  Dr Yamuna felt that one explanation could involve the 'cosmic egg' from Indian spiritual philosophy. We therefore now refer to this as the 'Cosmic Egg' experiment. 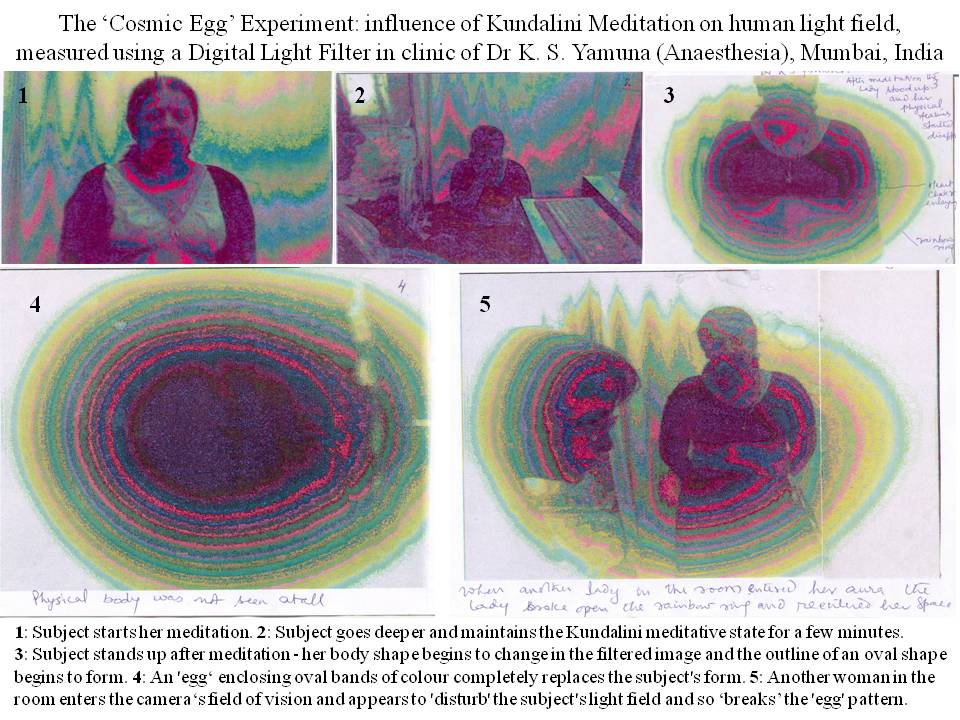 The images above were processed using another similar digital light-filtering software.

Over the years, we at Resolutions have seen some amazing phenomena with BioField imaging. The young woman in the scans above reported sudden psychic disturbances & that she was affecting electrical equipment. She said that lights around her would flicker, light bulbs would blow & that computers would malfunction.

As she was causing problems with computers we saved each scan as it was done so that we would not lose any scans should the computer malfunction. The scan above on left was the last one taken. Before we could save this view, we saw a large surge of 'energy' erupt from the area of her right foot. It connected with the computer table and the computer crashed. On rebooting the computer, the only scan that was found was the one above on left - despite it not having been saved.

The woman was then given ten minutes hands-on healing. She returned the following week for another scan - seen above on right. She reported that psychic disturbances had stopped. The base energy, between legs and around her legs appeared much calmer and more contained.

Many people use BFR for paranormal research. They are investigating phenomena which currently fall outside of the norm.
The biofield scans above are of a man who felt that he was periodically ‘overshadowed’ by a strange ‘presence’. This presence did not feel benevolent to him and he became very disturbed and upset while it was around him.
He underwent intensive treatment with Reiki healing, essential oils and cleansing herbs. After a few weeks of this treatment he reported that he no longer felt the presence around him and could once more resume  his normal activities. The biofield scans above show some unusual patterns on and around him at the time that he felt the presence.
Note the red pools of energy in the field around him which also connect with his body. There is also speckling, on and around him. There are white and black speckles within the light of the attachment. This is extremely unusual. These scans were taken using full-spectrum, daylight fluorescent tube on the ceiling.
The woman above often felt that she was shadowed by an energy attachment. Again, we can see the speckling containing white and black pixels (highly unusual). Note also the horizontal bands of pixels. There seem to be several areas of interest e.g. the red shape to her right and the unusual shapes to her left, which have the characteristic speckling within them.
This scan was taken in natural daylight (coming from window to her left) and is darker than the scans of man above. We often see paranormal effects in scans taken in daylight or low lighting.
Energy connections between people - identical twins
We can often feel that we're on the same wavelength as someone but with other people we can feel on edge, or that they're in our space. BioField Reader (BFR) can help you see where we interconnect with others. Some connections are harmonious while others appear protective or can project into our field.

A knowledge of the emotional and spiritual aspects of the chakras is essential when analysing the initial scans and in assessing progress. Improvements, seen as more balanced flow between individuals, can act as positive visual reinforcement for both therapist and client.

The scan of identical twins (below) reveals energy connections and what could be an energetic 'shielding' or 'defence' mechanism. A brief description is alongside the image.

We recommend taking initial scans of each individual to see where they have areas of balanced and imbalanced energy before scanning the individuals together to assess their energy dynamics. 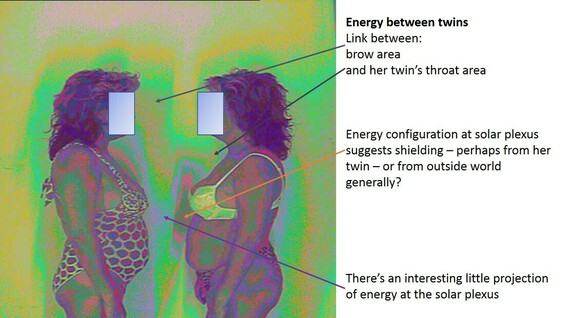 There's also lots about how experimental sessions were conducted in: The Scole Experiment: Scientific Evidence for Life After Death by Grant and Jane Solomon
Buy BioField Reader 8
Please note a discount code obtained from Ann Treherne of the Sir Arthur Conan Doyle Centre required for discounts below.   Don't have a discount code? You can still obtain BFR8 on our Products page.
Licence Key BFR8(CM) version is £449(GBP) - with Conan Doyle Centre discount code
Due to sometimes wholly unexpected, paranormal results, we are now using BFR - in The Norfolk Experiment - to try to capture evidence of communication between the dimensions. We have the capacity within the program to write a very large number of filters. Given the paranormal results already achieved, it is hoped that one filter (or perhaps many) will become a 'channel' through which the 'communicators' can transmit their signals.